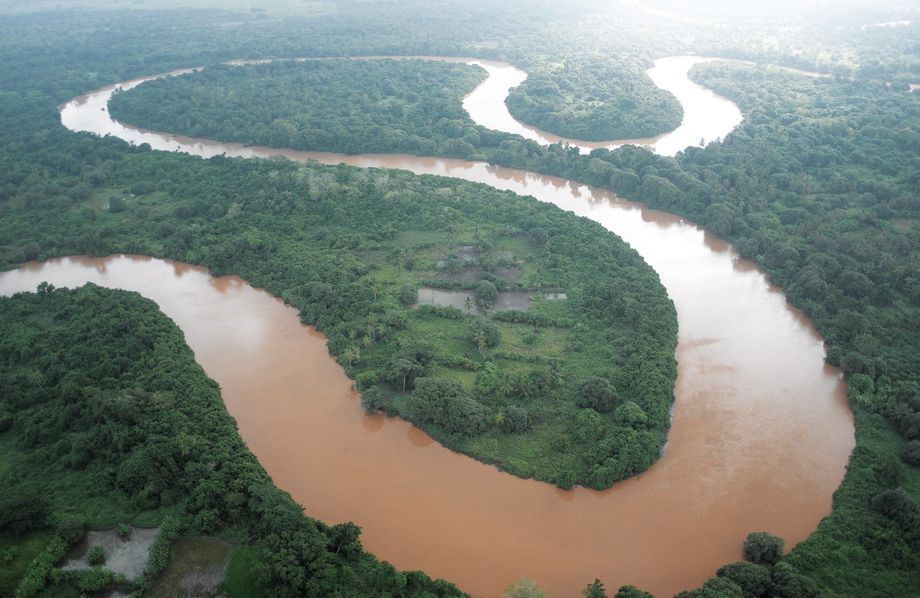 It is axiomatic that we are in no way protected from the consequences of our actions by remaining confused about the ecological meaning of our humanness, ignorant of ecological processes, and unmindful of the ecological aspects of history. William R. Catton, Jr. Overshoot: The Ecological Basis of Revolutionary Change. Photo of Tana River by David Beatty

Ecology, a word coined by Ernst Haeckel in the 19th century, whose etymological meaning comes from the Greek oikos, house, habitation or dwelling place, and logia, study of, is the science of living systems and the multiple variables within the system produced by mutual causality. Ecology has three aspects: it is the science of the relations of organisms to each other and to their surroundings; it is the study of the interactions between people and their environment; and it is in part a movement that seeks to protect the environment from the destructive effects of human economic activity.

As a science that gathers data on these three fronts there is still on the whole an assumed ontological divide between human and non-human or more-than-human realms. In its strict scientific methodology there is the detached scientific observer who is separate from that which he/she observes as a data gathering exercise. Traditionally we make this distinction based on two aspects we consider our special domain, and that define humans as such: language and culture. However this distinction as an unbridgeable gulf is beginning to break down in the face of a shift in perspectives both on the nature of consciousness and on the observable fact that animate life forms in their own way possess ‘languages’ as well as intelligent forms of interaction in terms of exchanges of information and energy that sustain a dynamically organized and intricately balanced ‘system’. In other words nature whether as cells, bodies or eco-communities, is not a collection of disparate parts based on a simplistic linear cause-and effect but a complex of interdependent wholes each element of which is part of a larger pattern of interdependent variables that inter-relate and evolve according to certain principles. The study of this became general living systems theory.

When we talk of the ‘natural world’ or the ‘environment’ there is an inherent tendency, brought about by the predominance of the written word in modern culture, to employ a narrating form of language that predisposes us to become fixated on dualistic categories: subject/object, life/matter, organic/inorganic, and thus we are predisposed to regard the ‘environment’ as something somehow separate from us, as an ‘object’ distinct from a ‘subject’. But in a profound sense we are the environment, all knowledge deriving ultimately from experience given us through the senses, something we forget when we get carried away with abstractions and the instrumental world of representations, along with a culturally determined utilitarianism. We are, however, always corporeally embedded in the world and the cosmos that we sense around us, and carnally situated in it we can only experience the real as a presence from within the depths of this earthly plenum.

Does a view of the world as a collection of separate objects to be used for purely human purposes in a self-aggrandizing culture of ruthless acquisition, selfish competition, and endless accumulation for its own sake, produce a better way of life than one in which the world is viewed as a multiverse or pluriverse of vibrant interacting forces in which there is an inherent acting contribution of the nonhuman within the human, in which human agency sometimes finds echoes of itself in nonhuman nature? Would the latter view, which encourages and arises from a patient sensory attentiveness to things and their affects, not foster an ecological sensibility that could inform all domains, the economic, political and social, to counteract the doggedly anthropocentric view that prevails with such destructive force, and which threatens the earth with what is already called the Sixth Great Extinction?

Deep Practice aims to create a free space where we can mutually explore the dilemmas and predicaments that the dominant culture of industrial growth society confronts us with. In exploring the broader parameters of a deeper ecological perspective we move beyond the science of ecology to a consideration of the ecological self and an 'ecology of being'.

As such we can view the self as a metaphor, and we can shift the boundaries according to our perspective: we can limit it to a unit of personal survival as an individual person, or a family, or an organization, or a tribe, or a nation, or as the human species. Gregory Bateson, author of An Ecology of Mind, commented that seeing ourselves as separate autonomous selves is erroneous: 'This false reification of the self is basic to the planetary ecological crisis in which we find ourselves. We have imagined that we are a unit of survival and we have to see to our own survival, and we imagine that the unit of survival is the separate individual or a separate species, whereas in reality, through the history of evolution it is the individual plus the environment, the species plus the environment, for they are essentially symbiotic.'

From this perspective then, which challenges the dominant ethos in the psychological, spiritual and cognitive realms, we can give attention to a social ecology whereby the exploitation of nature has in turn given rise to other social forms of exploitation within the industrial capitalist paradigm of social organization that drives globalization within a story of infinite expansion and growth on a finite earth. A radical shift in perspective would mean revising our view of ourselves, and our relationship to others and with the more-than-human world within which we evolved. This raises ethical considerations which is the third aspect of the Deep Centre's approach, inquiry into which can create a sound ethical base for Practice, and a culture of awakening that can open us to an Ecology of Love.